The DUBLIN Literary Award longlist has been narrowed down to a diverse and exciting shortlist of six. The announcement of the winner of the award, the world’s most valuable annual prize for a single work of fiction, will be an online event that everyone is invited to attend as part of the opening day of ILFDublin (20th May).

In advance of that, we invite you to get to know the nominees a little better, in an exclusive limited podcast series hosted by Maeve Higgins and Jessica Traynor. Kicking off on 15th April, a new podcast will be released each week in the run up to the announcement. Each episode will start with Maeve and Jessica discussing the book followed by an interview with the author or commentator. Listen at ilfdublin.com.

The 2021 DUBLIN Literary Award, sponsored by Dublin City Council is worth €100,000 to the winner. If the book has been translated the author receives €75,000 and the translator receives €25,000. Distinctive among literary prizes, nominations are chosen by librarians and readers from a network of libraries around the world.

The 2021 Award winner will be chosen from a diverse and international shortlist which includes a novel in translation, an English language debut and a first-time novelist. The Shortlist features three women and three men who come from Ireland, Mexico, the UK and the USA, and includes a previous winner of the award, a Booker Prize winner and a recipient of a Pulitzer Prize.

Ep. 1: Colum McCann in conversation with Maeve Higgins – available Thurs 15 April
Maeve and Jessica’s conversation about Apeirogon, is followed by Maeve’s interview with Colum McCann. Described by Elizabeth Strout as a “wondrous book … it will bring you to your knees”, Apeirogon mixes fact with fiction about the Israel-Palestine conflict to create an insightful and moving depiction of grief and healing.

Ep. 2: Ocean Vuong in conversation with Jessica Traynor – available Tues 20 April
After Jessica and Maeve discuss On Earth We’re Briefly Gorgeous, listen in to Jessica’s interview with Ocean Vuong. A Vietnamese-American poet, Vuong draws on his own family background in this beautiful coming-of-age story of the son of Vietnamese immigrant parents in the US.

Ep 3: Valeria Luiselli in conversation with Maeve Higgins – available Tues 27 April
Lost Children Archive is the topic of Maeve’s and Jessica’s conversation, ahead of Maeve’s interview with Valeria Luiselli. A fiercely imaginative epic road trip Lost Children Archive was described by The Washington Post as “a novel that daylights our common humanity, and challenges us to reconcile our differences.”

Ep 4: The Nickel Boys – available Tues 4 May
Jessica and Maeve will discuss The Nickel Boys before Jessica leads a wider conversation about the novel. Based on a real story, The Nickel Boys is a powerful novel that evokes the grim realities of a Florida reform school with care and compassion.

Ep 5: Fernanda Melchor and translator Sophie Hughes in conversation with Maeve Higgins – available Tues 11 May
The fifth episode sees your hosts dive into Hurricane Season, followed by Maeve’s interview with Fernanda Melchor and translator Sophie Hughes. An acclaimed and inventive murder mystery set in horror and squalor, Hurricane Season was described by the Guardian as “fiction with the brakes off”!

Ep 6: Bernardine Evaristo in conversation with Jessica Traynor – available Tues 18 May
This limited-edition podcast wraps with Jessica and Maeve swapping thoughts on the 6th title on the shortlist, Girl, Woman, Other, followed by Jessica’s interview with Bernardine Evaristo. Evaristo’s remarkable eighth novel follows 12 characters, most of them black British women, raising timeless questions about feminism and race. 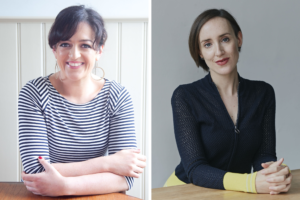 Maeve Higgins is a contributing writer for The New York Times and a comedian who has performed all over the world. Her latest essay collection will be published by Penguin US in 2022. She hosts a climate justice podcast with Mary Robinson entitled Mothers of Invention.

Jessica Traynor’s debut Liffey Swim was shortlisted for the Strong/Shine Award, and The Quick was an Irish Times poetry choice. She co-edited Correspondences: an anthology to call for an end to direct provision with actor Stephen Rea.

DUBLIN Literary Award:
Dublin City Council sponsors the DUBLIN Literary Award which is presented annually for a novel written in English or translated into English. Nominations are made by library systems in major cities throughout the world. Established in 1994, the Award aims to promote excellence in world literature. Designated a UNESCO City of Literature in 2010, Dublin’s literary heritage is a significant driver of cultural tourism for the City. dublinliteraryaward.ie

Full details of the 2021 shortlisted titles:

Hurricane Season by Fernanda Melchor (Mexican). Translated from the Spanish by Sophie Hughes. Published by Fitzcarraldo Editions. Nominated by libraries in Canada, Mexico, and the USA.

On Earth We’re Briefly Gorgeous by Ocean Vuong (Vietnamese-American). Published by Jonathan Cape and Vintage. Nominated by libraries in Norway, Sweden, Switzerland, and the USA.

The Nickel Boys by Colson Whitehead (American). Published by Little Brown Book Group and Doubleday. Nominated by libraries in Belgium, and the USA.

We use cookies on our website to give you the most relevant experience by remembering your preferences and repeat visits. By clicking “Accept”, you consent to the use of ALL the cookies. However you may visit Cookie Settings to provide a controlled consent.

Any cookies that may not be particularly necessary for the website to function and is used specifically to collect user personal data via analytics, ads, other embedded contents are termed as non-necessary cookies. It is mandatory to procure user consent prior to running these cookies on your website.

Analytical cookies are used to understand how visitors interact with the website. These cookies help provide information on metrics the number of visitors, bounce rate, traffic source, etc.